The Cincinnati region is home to magnificent man-made masterpieces and iconic landmarks. 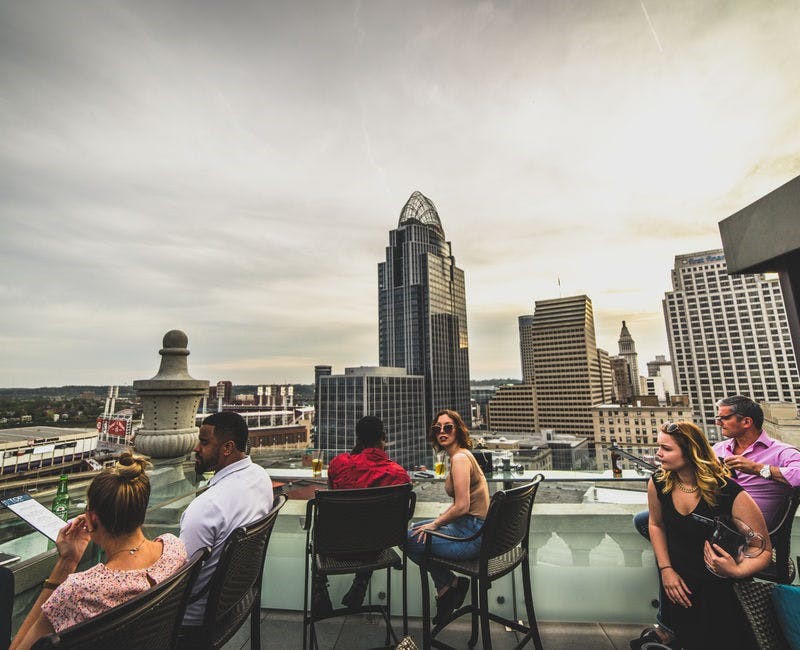 We love to quote Winston Churchill, who described Cincinnati as “the most beautiful of the inland cities” in America. It’s not just our city’s setting nestled between the river and rolling hills that people fall in love with. We are also home to magnificent man made masterpieces that bring unique cultural aesthetics to the region. Numerous significant buildings, fountains and statues stand today as symbols of our city’s heritage and our deep arts and culture roots.

A few of our favorites. 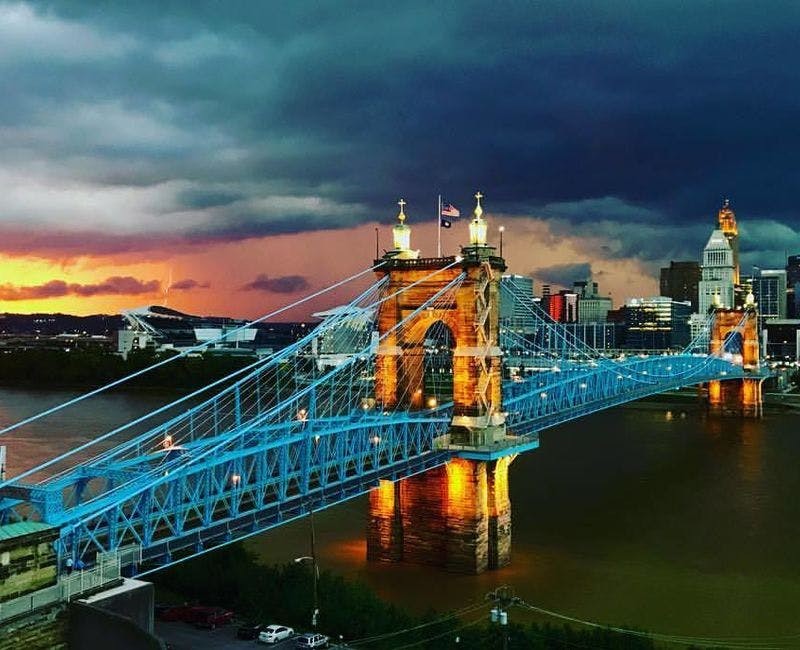 (Cincinnati, OH) – Sorry Brooklyn, this bridge was first. It opened in 1867, spanning 1057 feet across the Ohio River to connect downtown Cincinnati to Covington, Kentucky. This iconic feature of Cincinnati’s skyline was the mastermind of engineer John A. Roebling, who went on to build the Brooklyn Bridge.

(Cincinnati, OH) When this building was completed in 1930, it was the tallest skyscraper in the U.S. at 49 stories tall. It then served as a prototype for the Empire State Building. Some of the most beautiful views of the region’s rolling hills and flowing rivers can be enjoyed from the rooftop observation deck.

(Cincinnati, OH)– Considered one of the finest Art Deco buildings in the world, this former 1933 train terminal was also the inspiration for the imposing headquarters of the Justice League’s Hall of Justice in the popular 1970’s Super Friends animated series. Today, it is home to the Cincinnati Museum Center, featuring the Museum of Natural History & Science, Cincinnati History Museum, Duke Energy Children’s Museum and an Omnimax theater. The terminal’s rotunda features the largest half-dome in the Western Hemisphere at 106 feet high and 180 feet wide. pictured above, photo credit: Robert Webber

Cathedral Basilica of the Assumption

(Covington, Kentucky) –Inspiration was drawn from the Notre Dame Cathedral in Paris to create this stunning 1849 Roman Catholic cathedral. A late Gothic Revival masterpiece, the cathedral is home to the world’s largest handmade stained glass church window and three pipe organs. It is one of only 35 minor basilicas in the country, a title bestowed for its antiquity, dignity and historical importance.

(Cincinnati, OH) – This beautiful fountain is an homage to the Ohio River and its importance in our region’s history and ongoing development. It was cast in Europe and dedicated to the people of Cincinnati in 1871. It was originally intended to be a true drinking fountain – a symbol that water was free and available to all.

(Hamilton, OH) – Long before Hamilton, An American Musical, began wowing Broadway audiences, we knew Alexander Hamilton was cool. So much so, this city to the northwest of Cincinnati was named after him in 1791 . In the heart of downtown Hamilton, this 4,000-lb. bronze sculpture of this Founding Father stands 12 feet 4 inches high and is surrounded by famous quotes by the great orator. 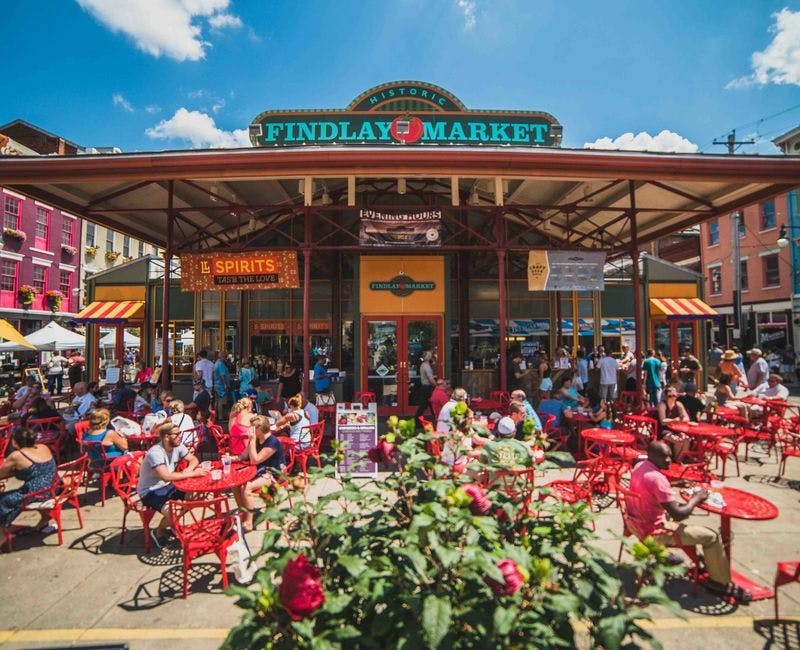 (Cincinnati, OH) – Located in the historic Over-the-Rhine neighborhood rich in 19th century Italianate architecture, this colorful market opened in 1855 and is the oldest continuously operated public market in the state. It offers an exciting collection of locally grown produce, gourmet and specialty shops and cafés. It’s weekend Biergarten with live music is a local favorite. 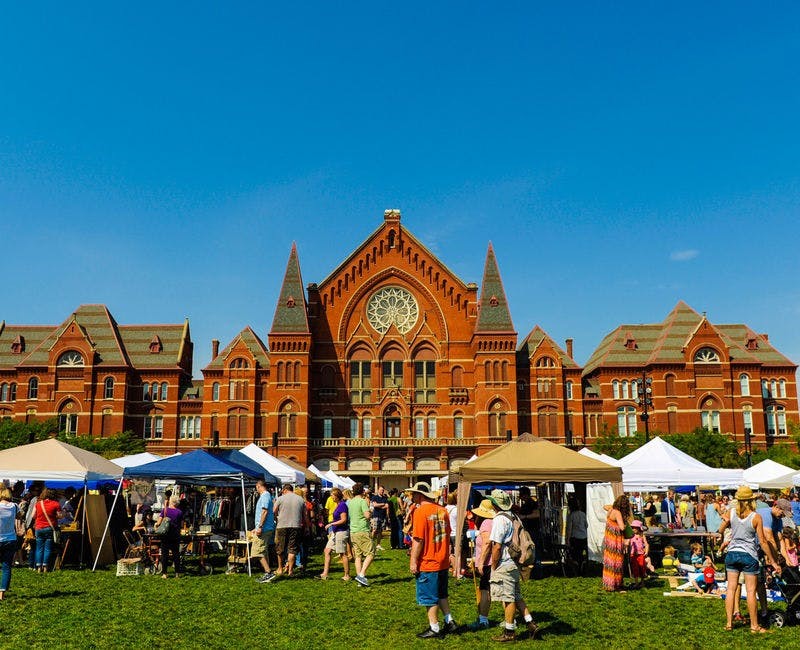 (Cincinnati, OH) – One of the largest and oldest concert halls in the country, Music Hall is a national treasure. It was the Venetian Gothic creation of local architect Samuel Hannaford, who ultimately designed more than 300 buildings throughout the city, and opened in 1878. In 2014, the hall found itself on the list of America’s most endangered historic places. The community rallied and this year Music Hall debuts the result of a $143 million renovation and preservation effort. It is home to the Cincinnati Symphony Orchestra, the Cincinnati Ballet, the Cincinnati Opera and the May Festival Chorus and anchors a burgeoning Arts & Innovation District.

(Cincinnati, OH) – Samuel Hannaford also designed our Romanesque City Hall that opened in 1893. The main building comprises four and a half stories with a nine-story clock tower. An optical trick known as forced perspective makes the building appear larger than it actually is.

(Cincinnati, OH) – We had to include this 2011 postmodern building with a top inspired by the tiara of Diana, Princess of Wales. Fitting for a city nicknamed the “Queen City.” The newest skyscraper – and the tallest – in the city, makes a dramatic statement along the riverfront skyline.