Craze for Cincinnati’s USL franchise, FC Cincinnati has taken over the city. 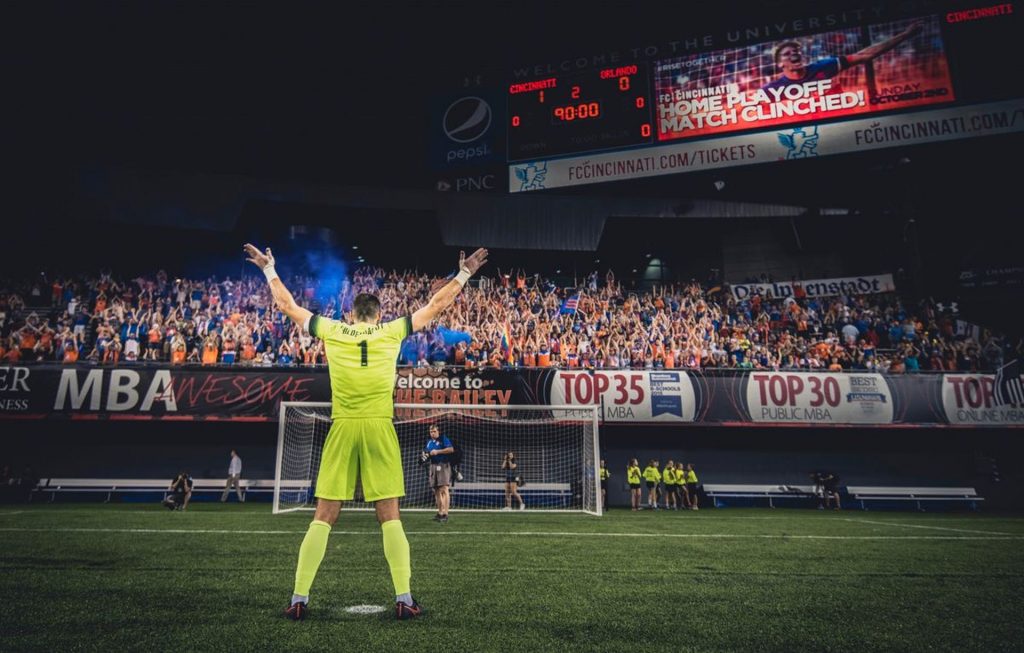 In just two short seasons the team of national and international superstars has not only won the hearts of hometown superfans who’ve packed the University of Cincinnati’s Nippert Stadium for raucous home games, but they’ve also blazed an unprecedented path through their league, setting records and defying all expectations as they make a stellar case for jumping up to MLS in record time.

Witnessing FC football madness is one of the most exciting spectacles in modern sport. From the raucous, foot-stomping, drum-bashing die hards who fill “The Bailey” section in the North end of Nippert with face paint, banners, smoke bombs, drums and a sea of blue and orange FCC gear to the electric atmosphere all over the surrounding Clifton neighborhood on home game days, the team has taken the city’s energy – long defined by its major league football and baseball sports teams – to a whole new level.

The organic enthusiasm from their Cincinnati fans is unlike anything previously seen, with supporters taking it upon themselves to create new traditions and chants (including “Mitch Says No!” in honor of shot-blocking goalie Mitch Hildebrandt) and the 1,700-strong Bailey crew providing a roadmap for fandom, from holding up FCC scarves at crucial moments to starting stadium-wide handclaps and generally firing up Nippert when things get tense or close.

For a team that hoped to reach 10,000 in attendance in its first year, but which hit almost 17,000 per game by season’s end and more than 35,000 for their instantly famous Crystal Palace friendly, FCC has quickly outstripped all expectations and become a fast tradition in this sports-loving region.

The team has inspired numerous fan groups including:“Die Innenstadt,” an independent, non-profit whose name translates to “Inner City” in german and which welcomes anyone to join in for member-only events, charter buses to away games and watch parties.
“The Pride,”
“The Legion,”, a student-focused group
“Queen City Firm,”,
“The Bailey Bastards”
“The Den,” which focuses on parents and children.

Each unique group brings their own special energy, gear and game day cheers to the party.

FC Cincinnati Craze By The Numbers

All figures are accurate as of posting date.