Personalization is the Future of Pharmacuticals

Eccrine Systems pioneers a technology that could change the face of medicine.

Medications can be as dangerous as they are effective. Indeed, a handful of drugs like chemotherapy are closely monitored with blood tests, since their misuse can be lethal. But the vast majority of drugs are prescribed with one-size-fits-all dosing, regardless of a person’s age, weight, or gender. “And that’s a real problem because we as individuals metabolize those drugs very differently,” explains Gavi Begtrup, CEO of Eccrine Systems. Doctors know this is a bad system without many better alternatives in place, and its impact is staggering: Billions of these prescriptions go out to US patients every year.

The solution lies in personalization. And thanks to the innovations at Eccrine Systems, we can now continuously monitor a person’s individual drug levels, not with invasive and costly blood tests, but by analyzing their sweat. Based in Cincinnati, Eccrine has developed a non-invasive, wearable, electronic device that patients could use to easily (and painlessly) track their personal drug responses to everything from Ibuprofen to Lipitor. The device, worn on the forearm, stimulates a small amount of sweat, analyses it, and–eventually–will send data directly to the patient’s doctor, who can then adjust the dosing as needed and also monitor compliance and side effects.

The innovation is in the method: “Using sweat to personalize drug therapy is a surprisingly new idea,” says Begtrup. 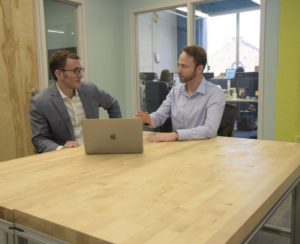